Superdude is a true original, a fabulous beast made of flesh come all the way from Warhol's Factory to right here, now with a million fast-lane tales and a just released second album of amazing music Grind It To A Finish.

After incubation in New York City's steamy music and art underworld, the superfit Superdude came out punching in a riotous video for the title track of his first album Guerrilla Rock, going glove-to-glove with 1997 Boxing Hall of Famer Jose Torres. Of course he gets flattened ... but he keeps on singing.

Over eighty television stations across the country including MTV, VH-1 & NBC played the video, and the underground rock stations fell in love with Guerrilla Rock's euphoric rock/pop/disco/punk sound, ten trippy tracks adding up to a soundtrack for a thoroughly modern rock opera. A little "Rocky Horror," a little Tubes, a bit of the B52's, and lots of tongue-in-cheek, with BIG production, it's all Superdude, the songs co-written with long-time partner, guitarist/producer J. P. Pergamo. 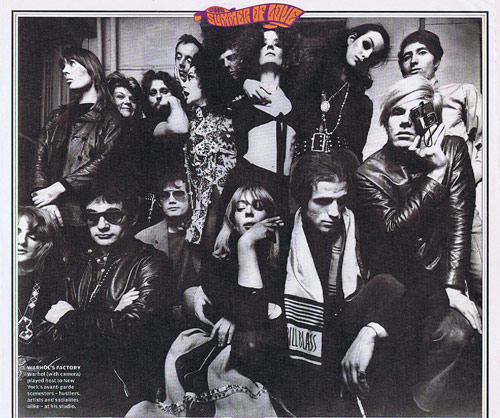 Superdude has spent a long time getting you ready for him. He was the boy star of the Brighton Beach water shows--as a stripling he became a regular at The Factory with gossip his specialty and always guaranteed Warhol's ear: the class photo of "Andy Warhol's Superstars" has placed him in that very spot. Jackie Curtis introduced him to Charles Ludlam's Ridiculous Theatrical Company; he appeared in five productions there ("Turds In Hell," "Whores Of Babylon," "Bluebeard," "Eunuchs Of The Forbidden City" and one he can't, for the life of him, remember). David Johansen used to play guitar for them, and Superdude - then just Dude (his middle name) - determined that Rock And Roll was going to be the life for him.

Dude morphed into Superdude, rock and roll star. Along with Pergamo and P's brother Ace on drums they became The Stonemen, playing Max's Kansas City, CBGB'S, Kenny's Castaways, Great Gildersleeves, and the Mercer Arts Center -- everywhere fabulous stuff was going on. He became a downtown celeb, with bands like Kiss and The New York Dolls having him MC their shows. Everything was happening for the 'dude, and for Pergamo, whose own band, Nuclear Energy, was also doing great with a '83 Billboard top album pick with "Ground Zero." Then, a car accident took Ace's life, and left Pergamo badly injured. It took five years for Pergamo to fully recuperate and both bands languished.

While everyone else in New York was turning into yuppies, 'dude spent the latter '80s lying about on European beaches and having a very good time in Amsterdam. Then, in 1990, New York called; he was being offered his own cable TV show. "Superdude Party" was over in just two editions -- one that covered one of Grace Jones' birthday parties and the other a collection of wacky interviews with, among others, Beauregard Houston-Montgomery on his doll collection. Superdude didn't want to spend any more time away from rock and roll.

In '92, Superdude released a 12-inch dance single, "Rosie Red Light" and "Body Electric" (b-side) -- an updated version of which appears on the new album -- and was thinking about a whole album of dance music. Pergamo had been getting close to Jose Torres, former light heavyweight world champion who was the boxing coach at his Brooklyn gym, and thought these two stars should work on something together. Pergamo came into some money at about the same time Torres heard he was to be inducted in the Boxing Hall Of Fame. In November of 1994, the band went into Ace Studios to record an album with a world-class engineer (Frank Heller, a Grammy winner for his work on Jimmy Cliff's "The Harder They Come," and who mixed LL Cool J's triple platinum album and Madonna's breakthrough single, "You Can Dance").

With a crazy cover comprising a Superdude portrait by rock lensman Bob Gruen and artwork by Victor Rinaldo, the video would be accompanied by an invitation to "A Ringside Seat at the Fight Of the Century".

"Guerrilla Rock" is a fast ride to fun; make sure you're on board.